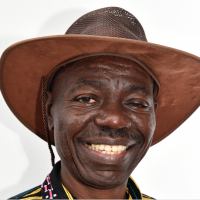 Art Education: He graduated from Middlesex University in London, U.K., with a Bachelor of Fine Arts degree in 1998 and a Master of Fine Arts degree in 1999. He taught art at the Kabulonga Girls School in Lusaka in 1990, after completing an Art Tecaher’s diploma form the Evelyn Hone College in Lusaka in 1989. Miko studied Arts Administration with Lawrence Yombwe in teh United States in 1994. He founded the Zambia National Visual Arts Council in in 1989 and managed the Henry Tayali Art Centre in Lusaka in 1994.

Born in 1961 in Mwense District, he lives and works in Lusaka. A veteran in the field, Miko is a practicing artist and culture consultant. He received a BA in 1998, followed by an MA in 1999 from Middlesex University in the UK specializing in Fine Arts. While his early work was often inspired by dance and theatrical performance from his rural childhood, Miko&rsquo;s later works are focused on movement, displacement, social, economic and political issues. Commenting on both social and cultural displacement, his pieces are visual interpretations of the factors molding present-day African society. As well as exhibiting nationally Miko has worked with curators of the highest repute abroad, participating in the 1993 and 1997 Johannesburg Biennials and exhibiting at various galleries and museums internationally. Miko served as the resident artist at CRIC Switzerland in 2000 and he has held various conferences on the direction of African Art globally. Published in leading magazines such as Artforum International, Miko is an undisputed leader in the field of contemporary African art. He currently serves as Vice Chairman of Lechwe Trust. He was also one of the initiators of Zambia&rsquo;s National Visual Arts Council and the Twaya Art Gallery, and contributed to the establishment of the first Visual Arts degree course at the new School of Media, Performing and Fine Arts at Zambian Open University, where he works as a Fine Arts Lecturer.